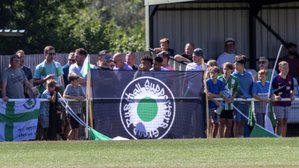 The Rusthall Supporters Group are a friendly group of non-league supporters that follow the Rustic's at home and away during their season-long campaign!

The Rusthall Supporters Group was formed in 2019 when the founding members recognised the need for an inclusive way to get more Rusthall FC supporters travelling to away games and to meet fellow, like-minded football fans.

The group will often muck-in at the club with various tasks, supporting the club's mission: "to be the best club possible”.

The members often attend our games with their young football supporting families, who also join in with singing, drumming, flag waving and more!

If you would like to travel with the group to away games or learn a song or two, follow them on Twitter and drop them a message: Rusthall Supporters Group

You can also support their initiative to have a 12th Man Fund at the club, where you can donate what you can afford & ALL proceeds will go towards our First Team playing budget!