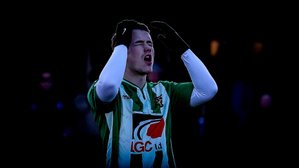 It's over! FA delivers long-awaited verdict on the 2020/21 non-league football season.

2020/21 season at steps three to six curtailed with immediate effect.

More than 75 per cent of teams voted to end the campaign if games could not be played with fans before April 1; it is the second time in a row it has been curtailed after last season's results were declared null and void in March.

New coronavirus guidelines announced by prime minister Boris Johnson this week stated sporting events will not have spectators before May 17.

It is now the second time in a row it has been curtailed after last season's results were declared null and void in March, denying us of certain promotion to The SCEFL Premier Division.

The Football Association statement read: "During this process, taking into account views of clubs and leagues, it was decided that extending the 2020-21 league season beyond the end of May 2021 would not be a viable option.

"This was due to various considerations, including the financial implications for many clubs, player contracts and the extent of the fixture scheduling issues caused by the national lockdown and various postponements which had resulted in there being 81 per cent of matches left to complete for Steps 3 and 4, and 75 per cent at Steps 5 and 6.

"Taking into account the survey results and the ongoing impact of Covid-19, which continues to adversely affect incomes for clubs due to restrictions on both spectators and hospitality, our alliance and leagues committees have reached a consensus that, subject to the approval of FA Council, the 2020-21 league season for Steps 3-6 of the NLS should be curtailed with immediate effect, with no further league matches taking place this season.

"It has also been decided that, subject to FA Council's decision regarding the curtailment of the season at Steps 3 to 6, both committees will revisit discussions around a potential restructure at Steps 4-6 of the NLS, which was previously agreed and has been on hold since the 2019-20 season. A further update on this will be provided in due course."

We can only hope that we benefit from a NLS restructure and The FA base the movement on the last two-seasons PPG (points per game) which leaves us in third place underneath Kennington and Holmesdale.