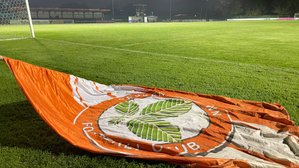 A perfect performance away from home saw Rusthall advance to the quarter finals of the Kent FA Senior Trophy with a 1-0 win over Beckenham Town.

A third clean sheet in a row was testament to the superbly organised and disciplined approach set out by Jimmy Anderson, and carried out to perfection by his hardworking players. While Beckenham have been riding high and scoring freely in the Combined Counties Premier League South, they were unable to find a way through the well-drilled walls of green and white meaning Tommy Lawrence’s goal was enough to secure the victory.

Rusthall began brightly and seemed to be playing with more freedom- the quality pitch was evidently much more suited to the kind of football they like to play than the one they found at Tower Hamlets on Saturday. An early free kick was headed up but not out and the resulting shot from Luke Adams was blocked well. Following great work from the ever-willing Frank NDouga, Adams was able to deliver a trademark long throw which was almost headed into the goal by a Beckenham defender. The pressure kept coming and, not for the last time in the game, Rory Salter played a superb ball through to Taylor Robinson who was only stopped by a great last-ditch tackle.

The relentless pressure paid off after 20 minutes- another corner was cleared, but Jack Smith, first to everything all night, intercepted on the right and played the ball to Adams. He swung in a wonderful cross with his left foot- the keeper couldn’t come for it but Tommy Lawrence certainly could. His perfectly-timed run ensured he had the beating of the defender and he placed his header right in the corner leaving the keeper rooted to the spot. The lead was fully deserved- Myro and Robinson were threats the Beckenham defence were struggling to contain and any shots from the home side were troubling the ball boys, but not Charlie Wealands in goal.
Beckenham felt they had a reasonable shout for a penalty toward the end of the first half although while the high-pitched protestations from the floored attacker may have caused a few local dogs to prick up their ears, the referee was unmoved and nothing was given. Cards were distributed before the break however, as NDouga was harshly punished for a high foot and a small fracas involving Adams saw him go into the notebook as well. Once again, Luke Adams deserves enormous credit for the selfless role he is playing just now- he constantly dropped deep to help protect the middle of the park, held the ball up expertly for the onrushing Myro and Robinson, and helped to ensure everyone was where they should be. While he may not have been banging in the goals recently, he is still playing a very important part in this improving team.
Beckenham were clearly on the end of some harsh words at the interval as they came out with intent and, initially, Rusthall were struggling to get out. When the ball was knocked back to a decent shooting position, Wealands would have been thinking this would be his first test of any description. It wasn’t to be, and while the shot was not quite so far over the bar as some of the first half efforts, it still didn’t threaten and the initial strong pressure from Beckenham rather withered away. Instead, it was Rusthall who were more dangerous- sitting in and then breaking with pace. One such attack was instigated by Rory Salter who intercepted brilliantly before James White played a fantastic ball over the top for Myro who found himself with acres to run into. He perhaps shot too soon but still, his effort had to be saved brilliantly and the rebound just would not fall for Frank NDouga.

Any attacking threat from Beckenham was nullified instantly- Jake Hampson had a faultless second half with some resolute defending, and Ryan ‘Lenny’ Styles and James White were unbeatable in the air and on the ground. Tommy Lawrence followed up his goal-scoring heroics with a goal-saving block before running himself into the ground, replaced by Daniel Haastrup. By this time, Charlie Clover had replaced NDouga and Louis Anderson had come on for Myro and all three substitutes made a difference as well as giving players a rest. One player who had certainly earned a rest by the end of the game was Man-of-the-Match Taylor Robinson who ran and ran all night, constantly offering an option and putting defenders under pressure. He was unfortunate not to add a goal towards the end after he was put through from a brilliant pass from Haastrup but he should be very proud of his performance and indeed the difference he has made since coming to the club.

Beckenham had one last chance at the end of five minutes added time but a foul on Charlie Wealands put an end to that. This was a fantastic performance and a fully deserved victory which should give everyone a boost of confidence.

Let’s hope the many positives from the game are taken into the next test, this time in the league, away at Erith and Belvedere next Tuesday evening.