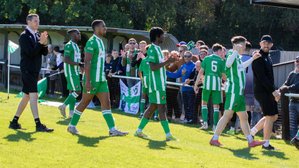 Rusthall climbed to 5th in the SCEFL Premier Division table following an impressive 4-2 win over K Sports in front of over 300 spectators at The Jockey Farm Stadium on Sunday morning.

Joining the crowd were groundhoppers from all over the country and they were treated to a fantastic game in the bright autumn sunshine. There was a new face in the Rusthall line-up in the shape of Tariq Ibrahim, recently signed from Larkfield and New Hythe, and he enjoyed a very impressive debut showcasing his superb ability on the ball. Yassin Fares returned to the starting eleven and was excellent throughout- his determination to carry the ball, his unexpected strength, and his willingness to chase back on the occasions he loses the ball have made him a popular figure with the Rusthall faithful.

Having played each other recently on a plastic pitch, it was back to a fine-looking grass pitch for this one and it was Rusthall who started the game on the front foot. Jimmy Anderson has assembled a squad who like to play good football and there was plenty for the groundhoppers to enjoy today. It wasn’t long before they took the lead- just 7 minutes on the clock and it was just reward for a solid opening to the game. The move started with James White, who had shrugged off the pain from an injury suffered on Wednesday evening- he played the ball forward to Louie Clarke who held off the attention of the defender to prod the ball back to Yassin Fares. Fares clipped the ball through for Clarke who had made a run in behind and he crossed in search of Reuel Powell-Downey who was manoeuvred off the ball in the box. Louis Anderson picked up the loose ball and laid it on a plate for Fares who tucked the ball away from 8 yards.

The lively Fares would go on to become provider for the second goal which came after 16 minutes. The impressive Calvin Gitiba, whose calm yet authoritative defending was missed in the midweek game against Sutton United, stepped forward on the half-way line and fed the ball to Fares who controlled, turned, and pinged an inch-perfect ball over the top which took out three defenders. Louie Clarke was there to let the ball drop and hook an expert left-footed finish past the despairing dive of the keeper. Rusthall were excellent value for their 2-0 lead and could have extended it further were it not for the wave of the linesman’s flag.

K Sports were back in it after 25 minutes when a cross from Adrian Brown was not closed down and the ball fell to Michael Holliday in front of goal who couldn’t miss. Rusthall maintained control of the game and continued to play some decent football but at the half, it was a slender 2-1 advantage for the home side.

It proved to be a dangerous lead and it wasn’t long into the second half when K Sports grabbed a scarcely deserved leveller. Dean Grant’s cross from the left was cut out by the long leg of Gitiba- the rebound fell to Grant who smashed it towards goal from point-blank range. Tommy Taylor made a great save but the rebound fell to Billy Lewins who squeezed the ball home before Taylor could claw it away.
Rusthall didn’t panic as it always felt they were on top. K Sports’ dangerous looking forward players were mostly entirely nullified by resolute defending from White, Gitiba, Anderson and Khalil. Jack Smith, who had patrolled the midfield with customary assertiveness was replaced by Jamie Milller who slotted in seamlessly, breaking up play and starting attacks with incisive passing. Rusthall were winning free kicks on the edge of the area- both Anderson and Clarke went close to adding a third. When a set piece was won a bit further out, it was Reuel Powell-Downey who took over- his superb strike was arrowing towards the top corner before a flying save pushed it on to the bar- Rusthall benefitted from a rebound this time as Calvin Gitiba followed the ball in and stabbed it home. Now 3-2 to the Rustics, K Sports had nothing left to give- a solitary substitute leaving whoever was in charge with little option for change. Rusthall on the other hand were able to bring on Addo Amankwah- so impressive against Sutton- Rory Salter in an unfamiliar left-wing role, and Daniel Blunn who added the fourth goal within moments of entering the pitch. Louis Anderson delivered the throw-in, Blunn controlled on his not-insignificant chest and flicked the ball to Tariq Ibrahim whose attempted shot was blocked. The ball fell kindly to Blunn who finished with aplomb into the far corner.

A game which Rusthall dominated came to a close and the jubilant crowd saluted their match-winners. Jimmy Anderson will no-doubt be pleased by the response from his players today- The Jockey Farm Stadium is proving to be a fortress this season and with performances like this, all involved with Rusthall will be happy.

Next up is a Kent Senior Trophy tie at Kings Hill FC before we return to The Farm for an FA Vase game against Montpelier Villa on Saturday 22nd October.