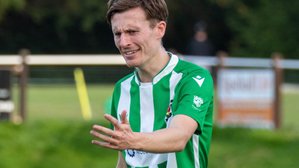 Rusthall were, once again, left ruing wastefulness in front of goal as another two points were dropped in a game which should have been won at a canter.

The first half was all Rusthall - the quality football on show a real indicator of what these players are capable of. Putting the ball in the back of the net has been an issue recently and again, despite presentable opportunities arising time and again, it was scruffy efforts which gave Rusthall a two-nil lead at the break.

The first came from good work from Reuel Powell-Downey who attempted to pass the ball forward. Realising neither teammate nor defender were going for the ball, he simply took it upon himself to chase his own pass and move in on George Bentley in goal. When his effort was blocked, Louie Clarke was on hand to turn the ball home.

Cameron Smart was enjoying a fine debut at the back alongside Calvin Gitiba and thanks to diligent work from Jack Smith and the excellent Tommy Lawrence, the threat from Lordswood was minimal. The second goal came on 24 minutes when Yassin Fares attacked down the left, poked the ball towards the danger area, and Clarke again prodded the ball home from close range. Rusthall were excellent value for their lead and it should have been more - costly misses would prove telling by the end.

Lordswood mixed things up at half time, shifting to three at the back and upping the intensity of their play. In truth, Rusthall never quite got to grips with things and despite continuing to fashion chances, the fluidity of their play was stifled. Chances kept coming but time and again the ball was saved by Bentley or skewed wide or high. Midway through the half, Lordswood were given a penalty by the referee - surely the only person watching who thought a spot kick was the obvious answer when two players simply ran into each other. Tommy Taylor saved to his right to maintain Rusthall's lead.

Just as it looked like the home side would triumph, Lordswood hit back with two late goals. First, the Rustics defence failed to clear and Lordswood pounced - the ball curling past Tommy Taylor leaving him no chance. Then, the final bitter blow - from a run down the right, the ball was squared and somehow it squirmed under Taylor and the scores were level.