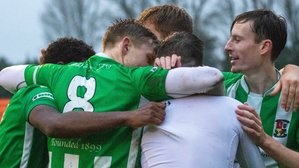 LOUIE CLARKE’S LATE WINNER MOVES US UP TO FOURTH!

Rusthall take all of the points thanks to Louie Clarke’s late winner at a windswept Woodstock Park!

Bill Johnson, who occupies the bin-end of The Bob Woodhams Stand on match day, gave us his account from Sittingbourne’s Woodstock Park!

“The day started with two Pipers, a Sapo and a Johnson traversing a sodden North Downs passage to not so sunny Sittingbourne. Journeying along non-league lanes with a swifty at the Sun Inn, Bredgar, arriving at the sparsely populated Woodstock Park Stadium.

The reported crowd of 45 were treated to an array of Rustic’ flags including the new ‘Bin End’ ensign. Just after kick off the rain moved from vertical to horizontal as did the football. Rustics snoozed their way through the first half dominating possession and creating half chances.

It came as no surprise that in their first serious attack Canterbury scored. The pain of that goal made worse by the creator was the verbally challenged Canterbury 7. Previously booked for an outrageous tackle. “I never touched him bruv” to the ref following his yellow left the visiting fans highly amused.

Glossing over what was a very poor half the Rustic massive moved to the stand behind the Canterbury goal and, thank goodness, most of the action came towards us. The beer took hold as the volume rose. On 56 minutes a corner sent in, Cameron Smart rose like a salmon to head powerfully home – Hope!!

Yassin Fares, Luke Miller and Dan Blunn arrived to add much needed energy and momentum. Waves of attacks gave further hope with no final result. Planty going mad, Paul Parker had to visit the back of the stand such was the tension…. Then, as all hope seemed lost Louie Clarke pounced on to a forward header from midfield, one on one with the keeper would he pass to an imaginary friend… not a bit of it, the keeper beaten, the visiting stand went wild, the journey home was a blur.

Over the moon when we could have been sick as a parrot.. Got to love this rollercoaster season. Lovely moment at FT the entire squad and coaching team came to shake hands and congratulate Sapo on the latest flag.”

The result meant a rise to fourth place in The Premier Division.

Up next, is two successive visits to Honey Lane, one on Tuesday the other on Saturday to compete in the SCEFL Challenge Cup and Kent Senior Trophy respectively.