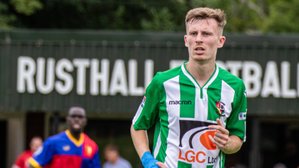 Tommy Lawrence & Luke Adams both on the scoresheet on Saturday afternoon!

The Rustics maintained their unbeaten home record with this hard earned draw against a very big and strong Lewisham side, who remain second in the table. From this performance, they will certainly be challenging for one of the four promotion places come the end of the season.

It was Lewisham who started stronger and they took the lead after just 10 minutes when a deep cross from the right found Bruce Muchenje and the pacey striker unleashed an unstoppable shot from 16 yards that gave Rusthall keeper Callum Hampson no chance as it flew into the net.

For a while Rusthall looked shell shocked from this early set back but gradually gained more control in midfield with, for the 2nd game running, midfielder Tommy Lawrence who was involved in everything and on 18 minutes it was Lawrence that leveled the scores.
Rusthall were awarded a free kick just outside the area and to the left of the goal and Lawrence curled the free kick around the wall and into the top right hand corner.

The game was becoming more open with both sides looking to get forward quickly and Lewisham regained the lead on 26 minutes when Tyrell Thomas lashed the ball home off the underside of the bar and were now causing the home side problems as the Rustics struggled to hold on to the ball. But this new look Rusthall side have plenty of battling spirit, they managed to withstand the Lewisham pressure and went in at the interval trailing 1-2.

From the start of the second period Rusthall were on the front foot and cheered on by there noisy supporters they put the visitors under pressure with full backs Louis Anderson and Bradley Large bombing forward at every opportunity.

On 60 minutes the Rustics brought on leading scorer Luke Adams for the tiring Ben Boodle and it was the former Punjab United striker who got the Rustics level on 71 minutes. Rusthall's lively Reuel Powell-Downey raced into the area and was bundled over giving the referee little option other than award a penalty, which Adams calmly dispatched sending the Lewisham keeper the wrong way for his 7th goal of the season.

Both sides refused to settle for the draw and continued to match each other attack for attack but neither keeper were seriously troubled in the closing stages and the draw was probably a fair result.

Rusthall have very little time to recover from this physical encounter as they travel to play Greenways (played at K Sports, ME206AU) ‪on Monday evening‬ for another league game.