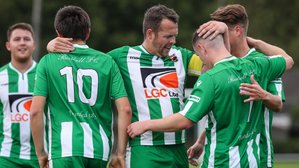 Another 3 Points, Another Home Win!

Three goals in an amazing 10 minute spell midway through the first half was more than enough to secure the Rustics 3 points against a weak looking Meridian VP at The Jockey Farm Stadium.

The lads came into the game full of confidence following Monday night’s excellent 2-1 away win Greenways FC.
Influential midfielder Tommy Lawrence was left on the bench to rest a knock he picked up on Monday night with young holding midfielder Ed Jonas starting after an impressive full debut in the midweek win.

Jimmy’s men started the game well with their passing game on the superb playing surface causing Meridian VP problems straight away, the pace of Reuel Powell-Downey saw the visitors’ defenders struggling to stop him fairly and the game became a bit stop start with a string of free kicks being awarded to the home side.

It was one way traffic and on 25 minutes the lads were rewarded for all their pressure when a great interchange of passes saw leading scorer, Luke Adams free in the box and the in-form striker made no mistake from 10 yards.

Just 3 minutes later it was 2-0, we were awarded a penalty following another clumsy challenge and Adams sent the keeper the wrong way from the spot.

Now in full flow, the lads twice hit the bar before another superb passing move involving several players was superbly finished off by Charlie Clover on 35 minutes.

Meridian somehow managed to prevent the home side from adding to their score before the interval and would have been glad to get back to the safety of their dressing room for a rest from the onslaught.

The second half failed to live up to the action of the first period as Meridian defended deep with the obvious intention of damage limitation and our chances were few and far between.

The win lifts us up to 4th in the table and they now know that if they win their games in hand they will go top of the table, but it will be a while before they catch up their games as following next weeks visit to Forest Hill Park they have consecutive cup games including the first round proper of the FA Vase ‪on Saturday 12th October‬ when Lancing FC visit The Jockey Farm Stadium.