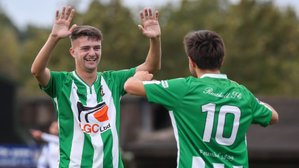 Styles, Powell-Downey & Adams all on the score sheet as the lads storm The Ladywell Arena!

The Rustics made it three league wins in a row with this comfortable victory at Lewisham based Forest Hill Park. The win lifts them to second in the table, 5 points behind leaders FC Elmstead but the Rustics have 3 games in hand.

In truth Rusthall were never at their best on the poor playing surface of the Ladywell Arena, which also houses an athletics club.

The lads struggled to play their normal passing game but were always too strong for the home side and took a deserved lead on 15 minutes, a superbly delivered corner from the right by Tommy Lawrence was met by the head of young central defender Ryan Styles and his downward header gave home keeper Matthew Bailey no chance. Forest Hill rarely created any danger with the central half pairing of Styles and Bissett again proving how strong they are for such young players.

The game became a little scrappy as neither side were able to control the midfield but it was the Rustics who created the next real opening, patient build up play down the right saw a cross from wide and Forest Hill were slow to close the ball down and the in form Reuel Powell-Downey was on hand to drive the ball home from 8 yards for his 9th goal of the season.

Forest Hill started the second period a lot more posatively and for the first time started to cause Rusthall problems and on the hour were rewarded for their efforts when Ndungu Memba scored a fine goal following a good move. This set back appeared to rattle the Rustics and they were forced into some desperate defending with keeper Callum Hampson making a couple of fine saves.

The Rustics made a couple of tactical substitutions and it was one of these substitutes that created the opening that made the game safe for Rusthall.

Steve Comacho went on a mazey run to the byline and cut inside the defender only to be brought down and the referee pointed straight to the spot. Leading league scorer Luke Adams stepped up and sent the home keeper the wrong way on 75 minutes for his 10th goal of the season.

The lads safely played out the remaining minutes to secure the points against a side that many teams will struggle against at their own ground.

The attention now turns to ‪Saturday‬ (12th) and the 1st round proper of the FA Vase when high flying Lancing FC are the visitors to The Jockey Farm Stadium for ‪a 3pm‬ kick off.

We’re hoping for a bumper crowd, as they look to go further in the competition than ever before.