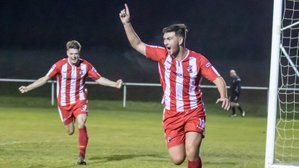 Three Points, Second in the League!

Rustics’ Raid the London Hire Ground to claim all three of the points to take us up to second in the league!

The London Hire Stadium was the next stop for the Rustics on this important run of games up to Xmas. Sutton were hovering around mid-table with games in hand in the teams above them. The Rustics are focusing on gaining one of the four promotion places, so each game seems to be taking on extra importance as the weeks pass by.

The first half was largely uneventful, Sutton were dictating he pace of the match, which wasn’t particularly quick, and Rusthall seemed content to contain rather than attack. Luke Adams up top had very little service, and for most part the Rustics were inaccurate and laboured in most facets of their game. A Tommy Lawrence long range effort was the only goal attempt of note and Billy Johnson had to react well when Suttons Arlie Desange shot from close range. 0-0 Half time.

Whatever the management team said at half time seemed to do the trick, as the first 20 minutes of the second half was much better from the away team. On 48 minutes Reuel was released, who in turn fed James ‘Milo’ Miles. Milo nipped round one player and finished neatly. 1-0. Ten minutes later it was Milo again. Arriving late in the box, he was found by Stephen Camacho and made no mistake to put the Rustics 2-0 up.

On 70 minutes the game seemed to have been put to bed when Luke Adams volleyed home from close range after a Reuel Powell-Downey shot was only parried by their keeper. 3-0 with twenty minutes to go.

Sutton Athletic however had different ideas on seeing the afternoon out and with 5 minutes to go they pulled a goal back, a corner was met at the near post and dispatched well. As full time approached Sutton scored again. A free kick was given away just outside the box and this was excellently curled over the wall, giving Billy Johnson in goal no chance. 3-2, and Rusthall were pleased to hear the final whistle moments later.

So on the whole the Management will be more pleased with the result than the all round performance, on a day when not all moving parts of the machine seemed to be working in unison. However, the lads got the job done and with a weekend off next week it will be interesting to see how other teams around us in the league get on.